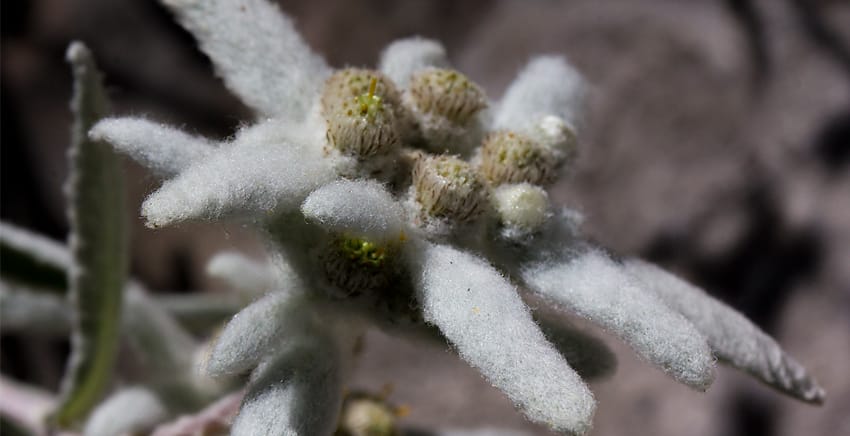 Most important rock gardens are the phytogeographic sections we use for growing and display of Croatian flora – the (Eu) Mediterranean and Sub-mediterranean, the Karstic and the Mediterranean trees and shrubs section.
The oldest rock garden is the Alpinum adjacent to the Main entrance and Alpine rock garden, as well as a small Western-European section.

The Alpinum (Alpinarium) is the oldest rockery in the Botanical Garden, and was already marked in the original Garden design of 1889. In 1892, in his description of the Botanical Garden, Josip Ettinger wrote: “…large rocks have been brought to the Garden and artificial cliffs raised to provide natural conditions for the cultivation of alpine plants”. Prof. Dragutin Hirc (1919) used the following words to describe this rockery: “The Alpinum, a garden built in the style of the botanical garden of Innsbruck, was Heinz’s masterpiece, where he cultivated not only foreign, but also domestic alpine plants which naturally grow in our mountains.” The rockery is called the Alpinum, not because it bears any relation to the Alpine mountain belt, but because alpinum was and still is the common horticultural name for artificial structures  for growing mountain plants. Nowadays, rockeries with mountain plants can be found in almost every larger botanical garden.
The construction of alpinums in botanical gardens dates from the 19th and the beginning of the 20th century, when the Garden’s Alpinum was built as well. Perennial plants and shrubs from all around the world, together with a few specimens of the Croatian flora, are grown in the Alpinum. The yellow blossoms of Winter jasmine (Jasminum nudiflorum), which is native to northern China, can be seen as early as January and February. On the western side of the Garden, which provides lots of shade, a Caucasian perennial known as the Caucasian pennycress (Thlaspi macrophyllum) thrives, and, in springtime, produces white blossoms. In the past, there was a small waterfall in the northern part of the Alpinum that flowed over a rocky cliff into a small lake, but, nowadays, there is only a moist basin with attractive Japanese primroses (Primula japonica ‘Miller’s Crimson’). Japanese primroses are also sown along the sewage canal. The humid air helps the Creeping saxifrage (Saxifraga stolonifera), which comes from China and Japan, to thrive. Unfortunately, because of the constant exposure to the dry and traffic-polluted air in the centre of the city, many sensitive alpine species do not thrive in the Alpinum and survive only for a short time. After they die, we plant new ones, constantly searching for more adaptable ones that could survive and embellish our oldest rockery for a longer period of time. 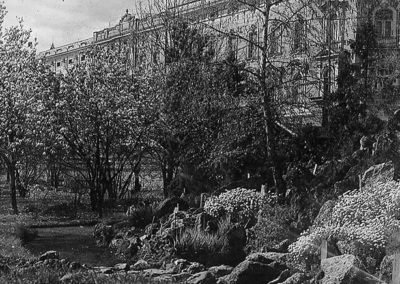 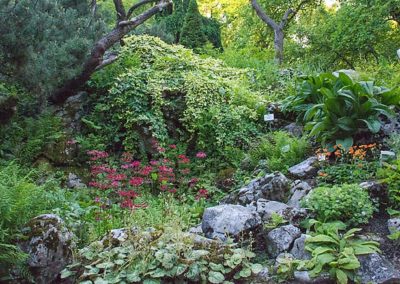 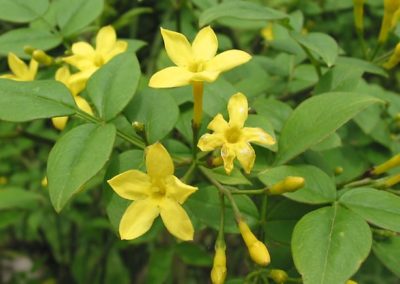 The alpine phytogeographic section (the so-called ‘alpine rockery’) was finished in 1949. It contains mostly herbaceous perennials, originally collected in the Alps. Since Croatia was one of the Yugoslav republics until 1991, the biogeographical groups were formed according to the former geographical divisions, and, since the former Republic of Slovenia was the country with alpine regions, this rockery includes mainly Slovenian plants or those cultivated from the seeds that originated in Slovenia.
In winter, the alpine species require long-lasting snow-cover, which is becoming quite rare in Zagreb. Also, they can hardly withstand the extremely high summer temperatures, which are becoming more and more frequent. However, some of the species from the lower Alps have adapted rather well to the conditions in the Garden. Due to lack of space, only a few shrubs or small trees, such as the pioneer species of Alder buckthorn (Frangula alnus) or Large-leaved willow (Salix appendiculata) are cultivated here. The Globe daisy (Globularia meridionalis) can be seen in the central part of the rockery. It is a plant with small violet-blue flowers grouped in globular inflorescences. The Encrusted saxifrage (Saxifraga hostii) can be seen in the northwestern part of the rockery.
The edges of its leaves form a low rosette and are encrusted with calcium carbonate. The Wood anemone (Anemone nemorosa) is a well-known early spring flower. After blooming and the ripening of its fruits, it loses the aerial part of the plant and spends the rest of the year as a dormant rhizome. A rare subspecies of the Marsh marigold (Caltha palustris subsp. laeta), although a marsh plant, has well adapted to the life in the rockery.
We also sometimes grow the Edelweiss (Leontopodium alpinum) here, which is a well known alpine plant and a symbol of mountaineers, but it does not live long in urban conditions. 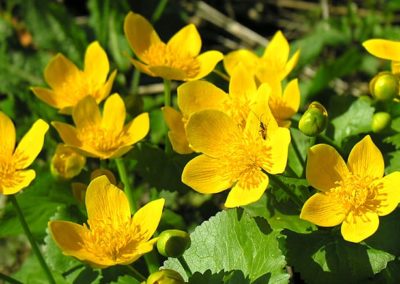 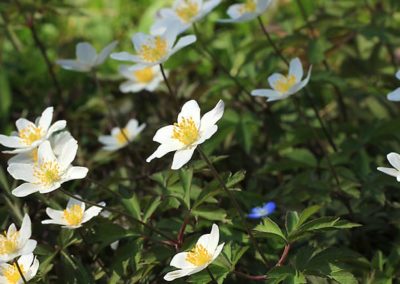 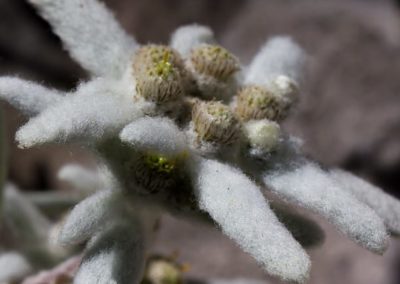 Edelweiss (Leontopodium alpinum) – a symbol of the mountains

The small western-European phytogeographic section was built in 1983. It was envisaged for plants naturally inhabiting the French and Spanish regions facing the Atlantic Ocean. The plants in this rockery must be protected during winter, just like those grown in the Mediterranean rockeries, since they originate from regions with milder climates than the harsh continental climate of Zagreb.
As the original plants brought from their natural habitats became senescent over time and disappeared, we have recently tried to regenerate the rockery by planting endemic species of the Iberian Peninsula (Spain and Portugal) obtained through seed exchange from the Index Seminum publication. The most interesting species in this little rockery is the endemic and relict Pyrenean ramonda (Ramonda myconi), an evergreen perennial that blooms in beautiful light violet flowers. It belongs to that family of popular ornamental plants, the Gesneriaceae, which includes African violets (Saintpaulia spp.) and Gloxinias (Gloxinia spp., Sinningia spp.) 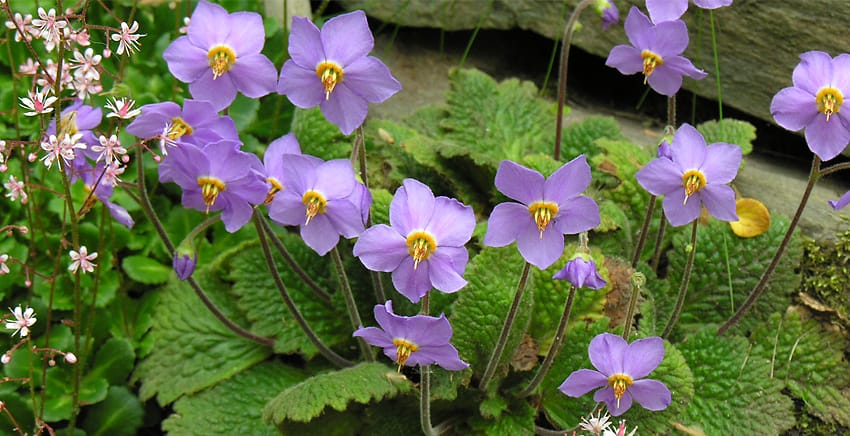